anyone having trouble with character creation, I solved this problem by creating a new account. Dunno why it worked, but one of my girlfriends 2 accounts simply cannot make characters, while the other, on the same computer, works fine.

The thing is, i've installed and successfully run maplestory on windows 7 on 3 computers (2 laptops and a desktop (my girlfriend's, borther's and sister's if you REALLY care)) but the computer i'm using now just doesn't want to run it. could be a specs thing, but this computer is so similar to my brother's that i doubt that's the case. Tried running in compatability mode for XP sp3, but havent tried vista sp2 or bypassing the website yet. anyway, I hope the first part helps some people

Ok i use windows 7 and Maplestory runs just fine. I disabled the transparency in themes section also I got rid of Norton (it sucks anyway) and I use Mcaffee. I have it like this on 4 other laptops and no issues with Maplestory at all. I hope this helps everyone.

I don't know if someone posted this yet or not, but my problem is either i'm not right-clicking on the correct thing or I simply don't have the compatibility option because in any of the tabs at the top it says stuff like General, Sharing, etc but it never has the Compatibility tab. What can I do?

okay I fixed my own problem, had to click on it before i right-clicked on it. anyways I found that when I went to change the Compatibility, it already WAS on Windows XP [SP3]. I clicked Run as Administrator, and I get the same *&#*^$ message that says:
This program has known compatibility issues.
Then it tells me to look online -__- no sh!t.
So, i went and checked everything i could right-click on and change the Compatibility, put it all to admin and WXP[sp3] and it STILL doesnt work.
I tried Vista (no SP).
Doesn't work
What the hell do I do now?!?!

Hi I tried every possible solution from here and basil and youtube and neoseeker forum. None works for me. I don't know why. I have window 7 Starter N. Can anyone please help me? I have the same error code over and over again -2147467259. Thanks a lot.
K

Nexon fails alot theese times xP(including other games, vindictus should be avabile in eu year ago!)
Maplestory EU, widnows 7 home premium, 32-bit,
everything happens from last update, your too?
my problems:
1.run compatibly-"malicious intention" running compatibly is malicious intention?WTF!
2.game says it`s offline OR
3.nothing happens but at my toolbar i see downloader working
+ check second image, what to do?

If i use compatibility for Windows Xp SP3 happen this: 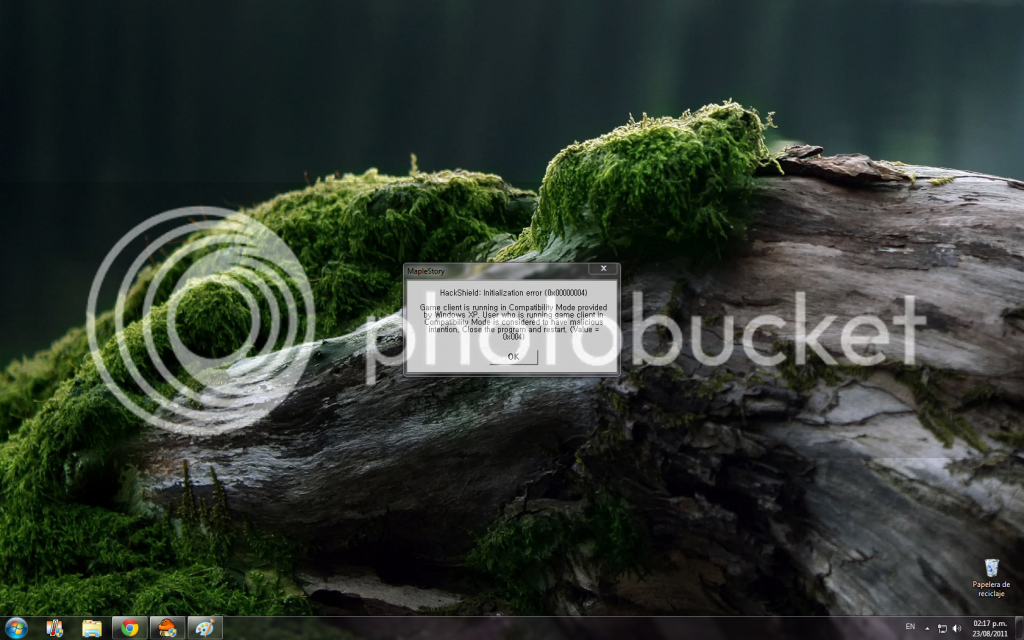 The link of the image is: http://i880.photobucket.com/albums/ac5/ureliano/Maplerror.png
B

This worked perfectly for me Thanks

I followed the below steps for MapleStory.exe... however..i also applied these steps to :

then launched the game through the desktop icon...

got it working with w7 ultimate. the trick was to give all the other stuff too admin rights and win xp (sp3) comp. mode: ASPLnchr, MapleStory, Patcher, Setup and unins000 on Europe MapleStory folder and in HShield folder to: ahnrpt, hslogmgr and HSUpdate. first time I tried to run it didn't work but after a reboot and new try it worked.

could you please help me with that?

So, like so many on this particular forum, I decided I wanted to play maplestory, and play it on my brand new computer! Now unfortunatly like so many others as well, I have windows 7, and maplestory for some reason or other has a hate complex for this operating system.

I've spent the last two days trying to figure this out.

And I've read every page of this forum, and though everyone's seemed to have great ideas, that worked for them, I have to say that they have not worked for me. And I am beginning to think it is because I have "Window 7 Home Premium".

It's been nearly a year sense most of these posts have been written, but I'm curious, if anyone has found a solution for this particular thing.

1. Game downloaded with no issues. Though when I click to play, it pops up with compatability issue message, and the website it tells you to check when you "check for solutions" is the wrong website all together. NOW. I was wondering if anyone has indeed found a solution for this, or if I'm screwed and can't play the real Maplestory server.
(Global). Let me know.

Please and Thank you.

I have never tried Maplestory so forgive me if this is worthless but I will offer a few thoughts ...

OK, #1, I recommend for all games is do not install them to Program Files. I personally create a folder C:\Games and install to there. The reason for this is simple: W7 tries to protect the system by preventing programs, except installers, from changing "Program Files" folder (Admin requests etc required) and many games, especially pre-Vista games, write .ini files or install levels etc under their install folder. So number 1, create C:\games and then install to c:\games\maplestory

#2b is Run as an Administrator and apparently this program may need that as well, although if you use my first suggestion then many games can be run without Administrator privileges.


BTW, it should not matter whether you run Home Prem, Pro, Ult), etc version of W7.
M

Now, I can't for sure say if it worked yet or not because the game servers are down for update/ maintenance, but I want to add, that when I downloaded it, as you said, into a games folder, I did not get the "can't find Dll!" error I had been getting, so I think that's a good sign!

I appreciate your suggestions, and I will update you on whether or not it worked.

TrainableMan said:
I have never tried Maplestory so forgive me if this is worthless but I will offer a few thoughts ...

OK, #1, I recommend for all games is do not install them to Program Files. I personally create a folder C:\Games and install to there. The reason for this is simple: W7 tries to protect the system by preventing programs, except installers, from changing "Program Files" folder (Admin requests etc required) and many games, especially pre-Vista games, write .ini files or install levels etc under their install folder. So number 1, create C:\games and then install to c:\games\maplestory

#2b is Run as an Administrator and apparently this program may need that as well, although if you use my first suggestion then many games can be run without Administrator privileges.


BTW, it should not matter whether you run Home Prem, Pro, Ult), etc version of W7.
Click to expand...

To let you know- I'm a little further now, than I had been, I ended up going to youtube, and searching up the problem, (It would pop up the webpage for nexon/ maplestory, so I assumed it wasn't yet working.

Found this youtube tutorial, where I make sure that nothing is checked in the maplestory.exe properties, then make a shortcut, and once the shortcut is made, move it to desktop, open properties, and change the name in "shortcut" Tab, there's a catagory called "Target" add at the end, after the .exe (GameLaunching) and then hit apply and okay, and after that it gave me a game play pop up I haven't encountered before, and then it prompted the hack shield and is now patching! So I think it's working.

Thank you everyone for your help. ^^
L

I've got the European version of maple story, everything seemed to work fine, even in windows
7 mode, but when I wanted to log on, it said there wasn't any connection, and I had to retry it
later...

Tried the American version first, but I didn't know I had to get one from my own region xD, so
it gave an error that I had the wrong server.
G

I think ik what happens


vahnx said:
Didn't work for me. Still get GameGuard (0) error. You sure you tested this? I'm on Build 7077 but it shouldn't matter.
Click to expand...

U have activated the antivirus and in most of games u have to desactivated till it uploads and then activate again try it, i do always that
Ad

You have to go to the hard disk drive then press the one with random letters. look for nexon press it, press maple. search for the file named maplestory then you're there. that explanation didn't really describe it right but i found it myself
You must log in or register to reply here.