No Audio Output Device is Installed and no Sound,video and controllers tab in the Dev

It wont let me see the properties,it gone when I click on it. 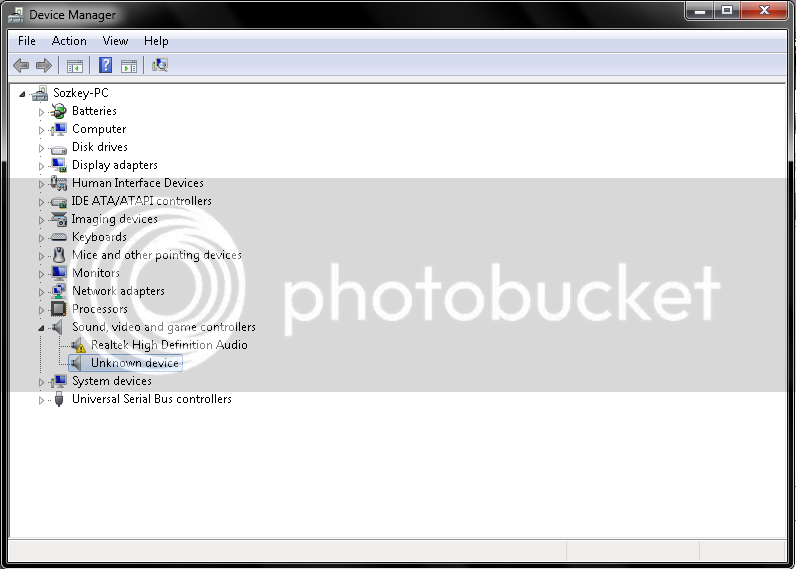 And nope there no yellow warnings,only the realtek divers that I install,here the screenshot,hope you find some information with it. 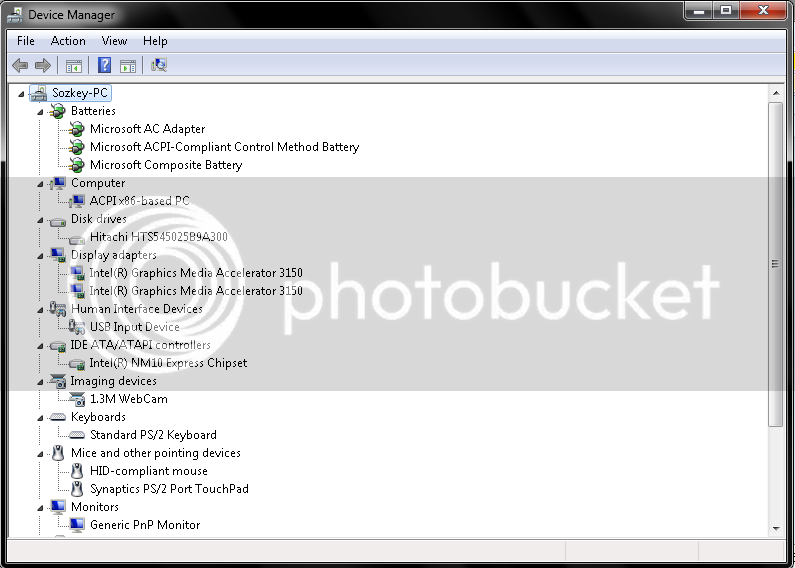 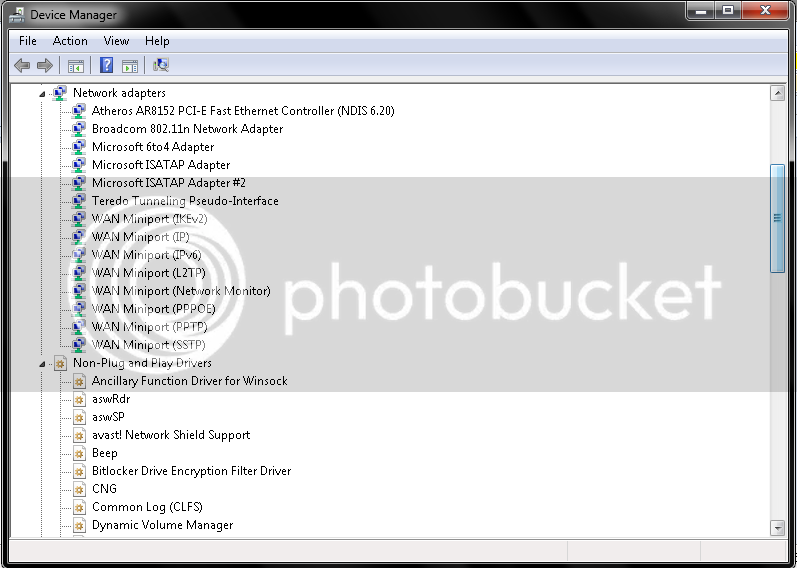 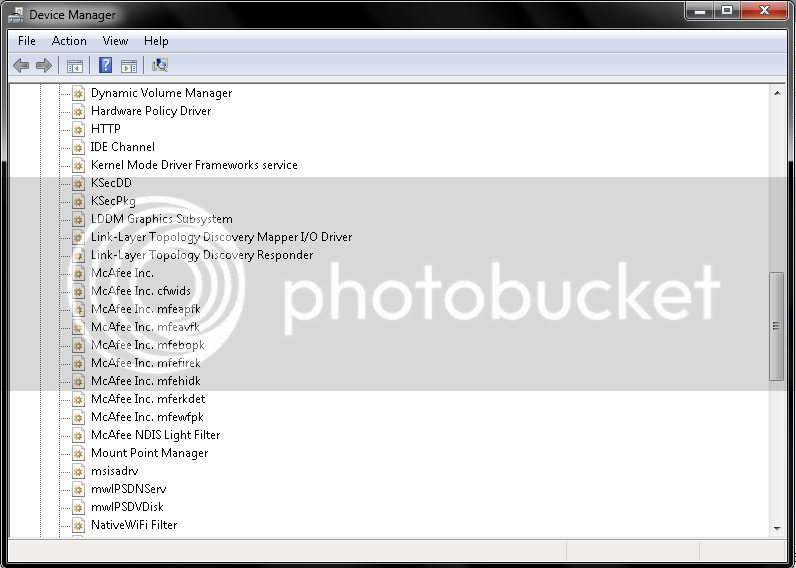 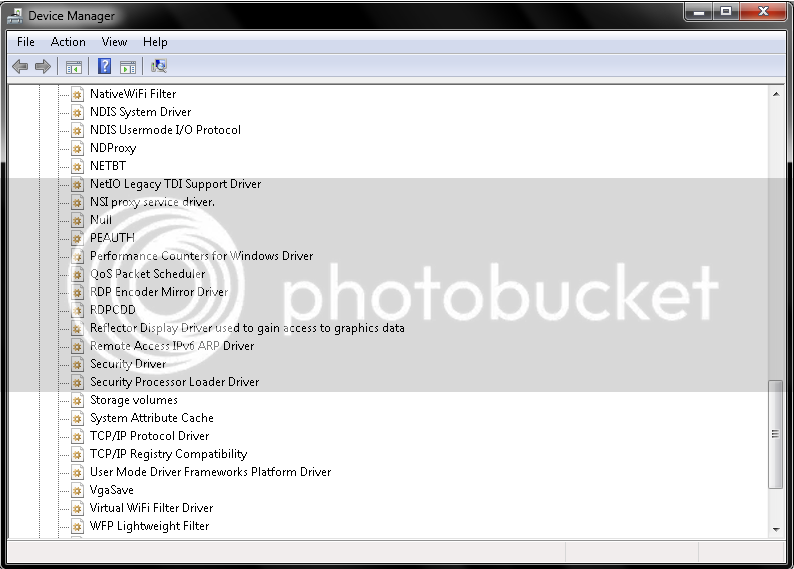 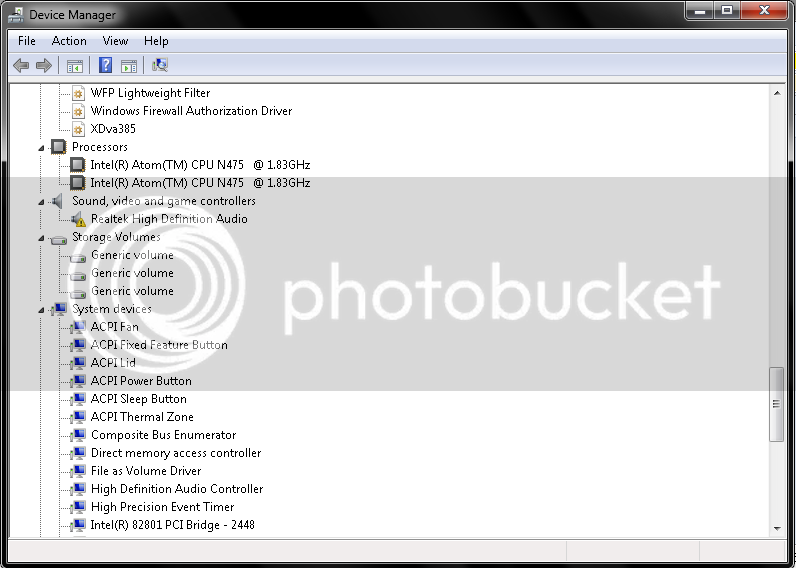 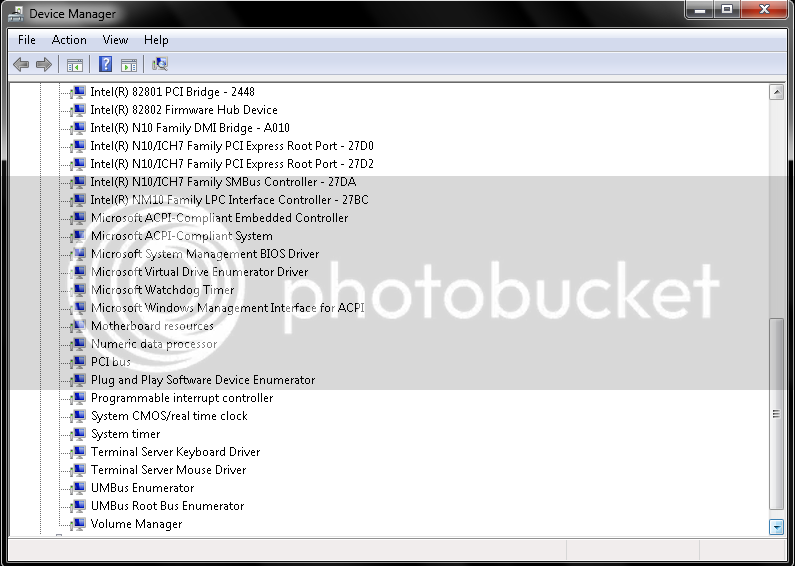 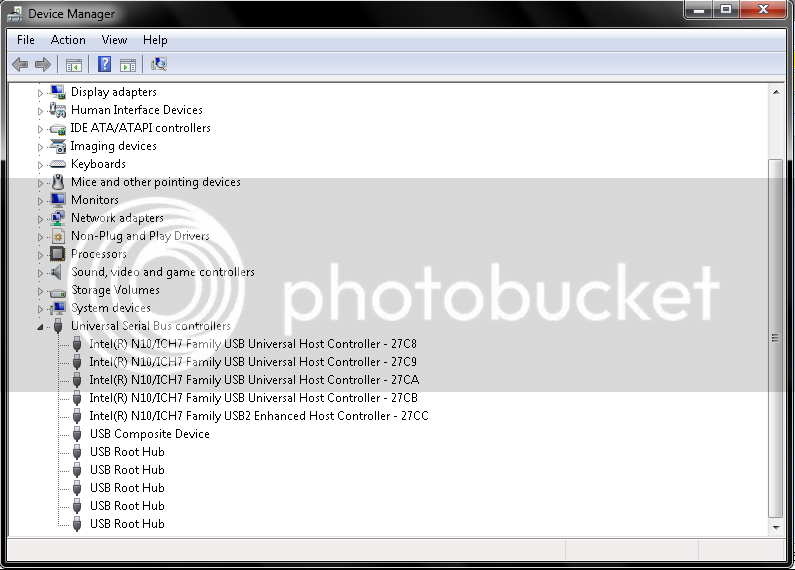 OK, I'm going to suggest something that I tell people to avoid. I think you should download and run Device Doctor. This program is far from perfect; I tell the horror story from when I tried it and it suggested 5 new drivers: 2 installed fine, 2 wouldn't even download, and the last one that it installed trashed my system so that I spent an hour trying to recover and had to do a system restore from safe mode. But you should at least run it and see what it suggests.

I would prefer if you didn't actually run the install portion until you show us the results, so if you would, just run the analysis. What I think we may be looking for are any drivers related to audio or serial bus or communications and I am curious if any will "jump out at me" as being the most likely. 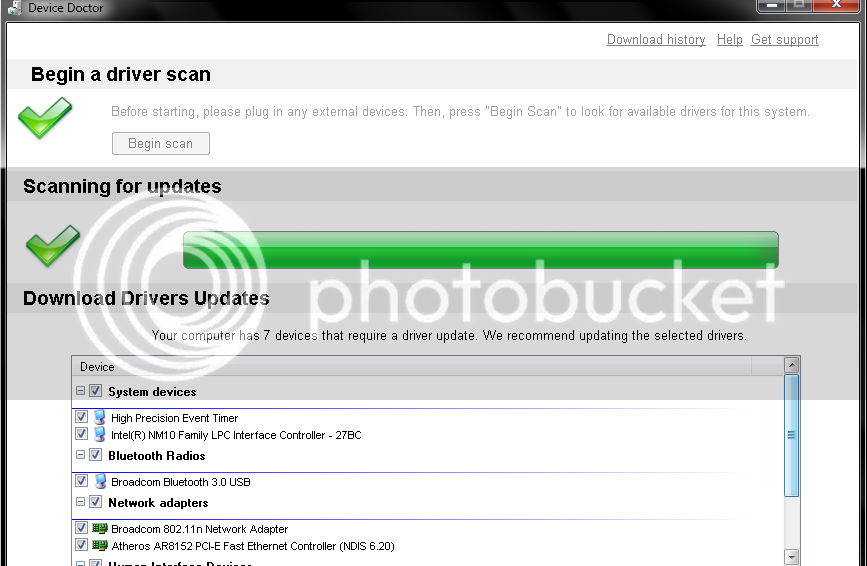 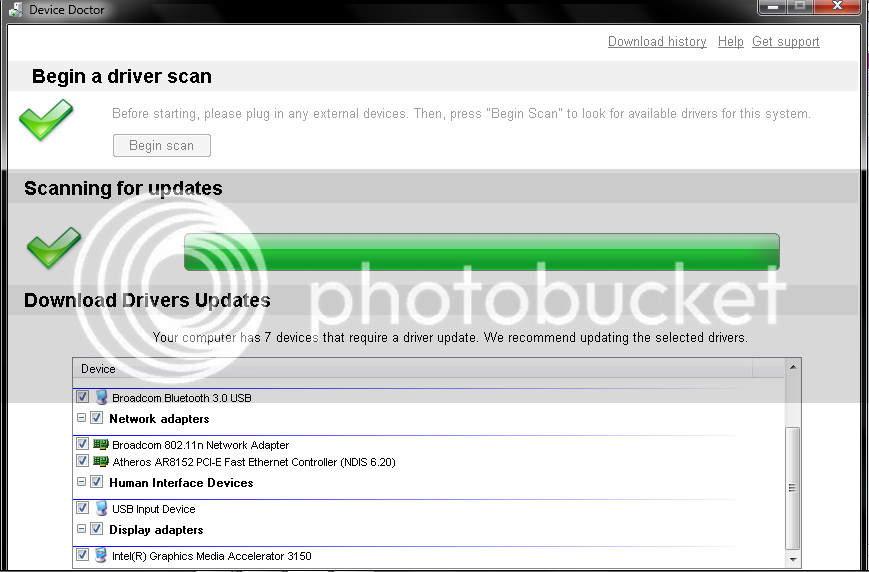 Then Unselect all but the second one down "Intel ... Interface Controller" and install that one. Once installed reboot. Any change?

If this would prevent your machine from starting normally after reboot then you enter safe mode by pressing F8 during POST. In safe mode go to restore point again but this time restore rather than create.

If that does not solve it then the second time around take another restore point and try the last one "Intel ... Media accelerator"
Last edited: Jul 25, 2011

Hmm..sorry just to be sure, is it Intel(R) NM10 Family LPC Interface Controller or Broadcom Bluetooth 3.0 USB?
Thanks.
Last edited: Jul 25, 2011


These others are not likely to help your sound problem but if you want to update, here is a description:
"Atheros" is your physical network connection so if you connected via wired connection it would use this driver
"USB input device" is likely a USB keyboard or mouse or game controller
Your Wireless network card includes bluetooth as well as internet (802.11n) - that's what those 2 "broadcom" drivers are.
and the "precision timer" I don't know but my feeling is it also has the most potential for messing up your system so do that last.

Personally, if those first two go in fine then I would likely go for the Atheros because if it screws up, you're not using it anyway but I doubt it will screw up.

And the USB input device next simply because it is unlikely to cause any issues.

The broadcom bluetooth should also not be a problem

the broadcom 802.11n is a concern because if that is wrong you will loose network connectivity. So make your restore point is set so that if you cannot connect you can restore easily and be back to the old driver.

finally the timer if you do that at all, again restore point. (Biggest unknown in the list.)
Last edited: Jul 25, 2011
Ad

This might take some times,and thanks alot for your suggestion,and your time sir.I'll let you know if anything happen.

I'd like to refer back to the sound problem.
What do you mean by this
"It wont let me see the properties,it gone when I click on it."
Are you saying the Realtek device disappears when you right click it, or you do not get a response from the properties?

It is the driver that you suggest me,http://www.download3k.com/Install-Re...ta-Driver.html,it download as normal,as other driver,but after I install it to device manage,it show this. 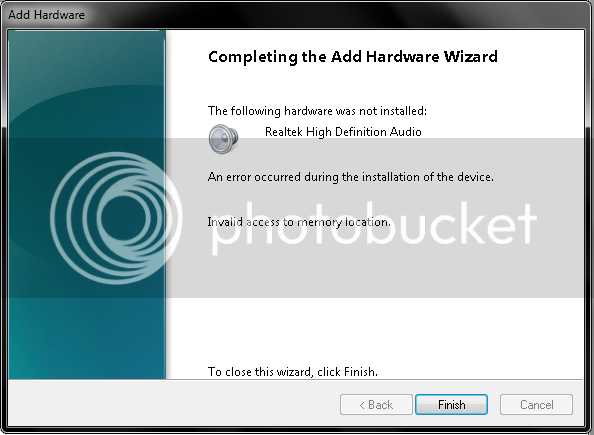 Then I close the window of the installing,then to the device manager windows,and found that the driver was name "Unknow device", I click on it to go to properties,then it gone,as it was remove from the device manger.

davehc said:
I'd like to refer back to the sound problem.
What do you mean by this
"It wont let me see the properties,it gone when I click on it."
Click to expand...

When I had the OP turned on "show hidden drivers" there is now an "unknown device" and I believe that is where it is not possible to right-click and get properties.

sozkey have you had any success installing the driver updates from Device Doctor? Any change to sound?

I done with the installing,the "Intel(R) NM10 Family LPC Interface Controller - 27BC" install smoothly,no errors,but as for the "Intel(R) Graphic Media Accelerator 3150",it got this error,below is the screenshot. 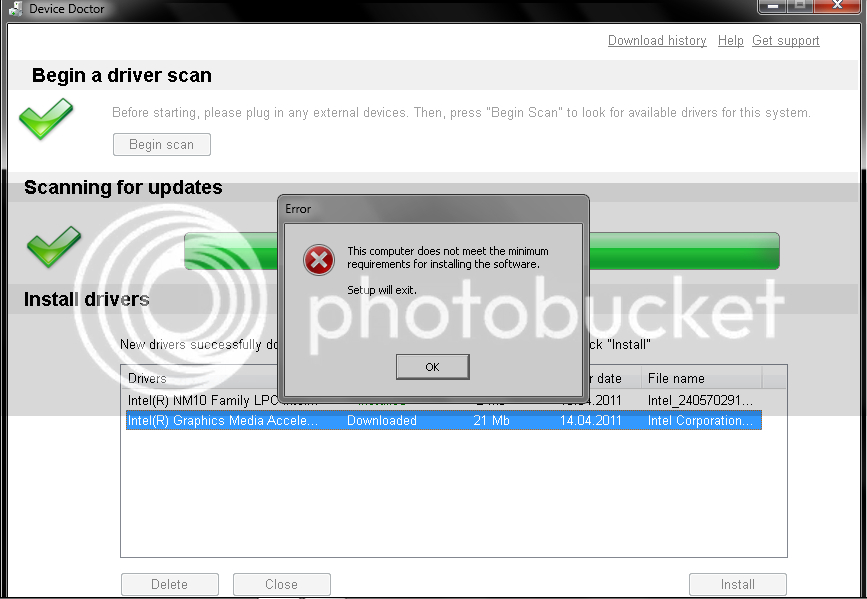 Alright, but did the first one make any change? Have you rebooted and is your sound working? Any change in device manager?

Nope it does not make any change,and I tried to reboot and still no sound yet.The realtek hd still have the yellow sign and (code 10).As for Intel(R) NM10 Family LPC Interface Controller - 27BC,it has added to device manager itself. 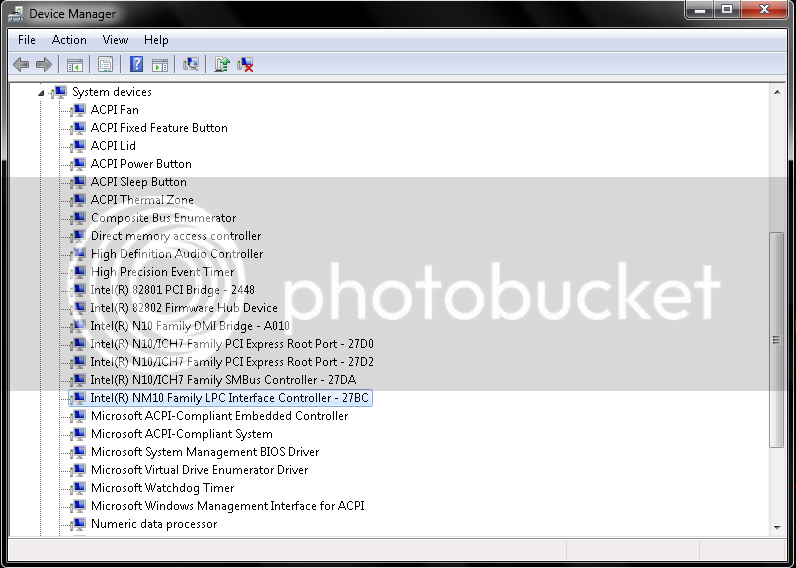 Perhaps if you took it to the Petronas Twin Towers and dropped it off the top it might make some sound ... just once more arghhh, so frustrating.

I'm back to thinking it's hardware and that your cheapest option is a usb sound card Sorry.
Last edited: Jul 26, 2011

Hehe,it okay,thanks alot sir for all your suggestion and I'm sorry if you use up some of your time.

Does that mean you now have sound?
Ad

OCing one chip at a time

Probably a moot point, but did you go into your BIOS and make sure someone hadn't turned off your sound device? If it is enabled in the BIOS then at this point I'd have to conclude the sound device has failed... I'd contact your netbook manufacturer for support if it is still under warranty.

You tried which before? Changing setting in the BIOS? or tried contacting the manufacturer?

If you changed some settings in the BIOS then it may be worth looking in there again now that you have some new drivers loaded it could make a difference.
You must log in or register to reply here.