We got upgraded to Time-Warner's RoadRunner Extreme connection today. Only $5.00 more per month than we had with RoadRunner Turbo.

Actual as tested by: www.speedtest.net 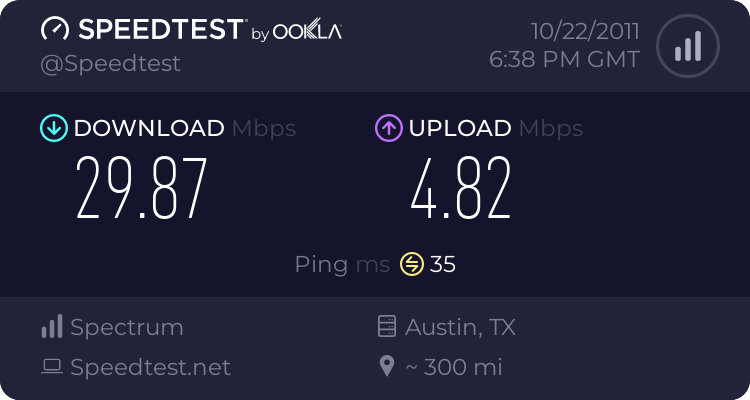 Not too far off in my opinion... we're rocking now baby! Woohoo!

Now the following is from: www.pingtest.net

Nibs; In a few month's after I move. I'm going to be switching from AT&T's slow dsl to Bright House for my internet. What are the price range's/speed's available for Bright House ?DSL was ok until AT&T took over BellSouth a few year's back. AT&T suck's.

To be honest, I have never heard of Bright House internet service. I see they're a cable, phone, internet provider similar to Time-Warner and that they use RoadRunner and offer packages of 10, 20 or 40 Mbps download speeds as RoadRunner Standard, Turbo and Lightning.

You get what you pay for I guess. The Syracuse server is geographically close but I think I've gotten slightly better results from others in the Northeast. 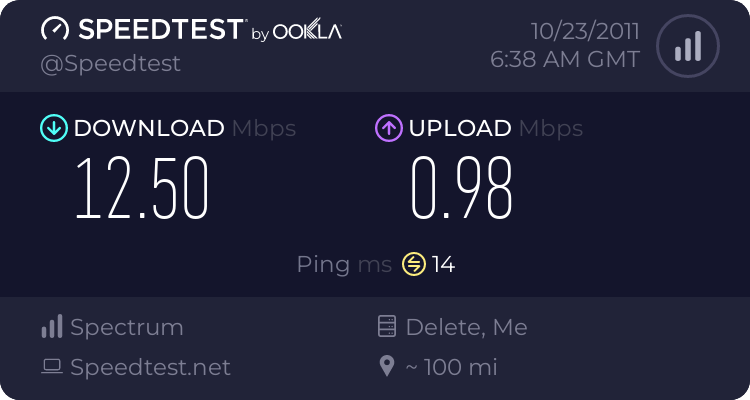 Nibs. As far as I know Time Warner changed to Bright House 5 or 6 year's ago. My cable used to be Time Warner. A few year's ago, it switched to Bright House. You're obviously some where in the south east U.S. I'll bet if you call and ask your cable company, they'll tell you it's Bright House now. Either way it's the same where I'm at. They get the internet through Road Runner. Once I move I'm ditching AT&T's slow dsl. It's weird how they'll give new customer's a price of $9.99 a month for the same slow service they're charging everyone else $32.95 for. That's for under 1.0 mbs.
Ad

No, Time-Warner is still Time-Warner. Bright House is only located in a few states, about 3 or so. We're in Texas, so that's the Southwestern USA.