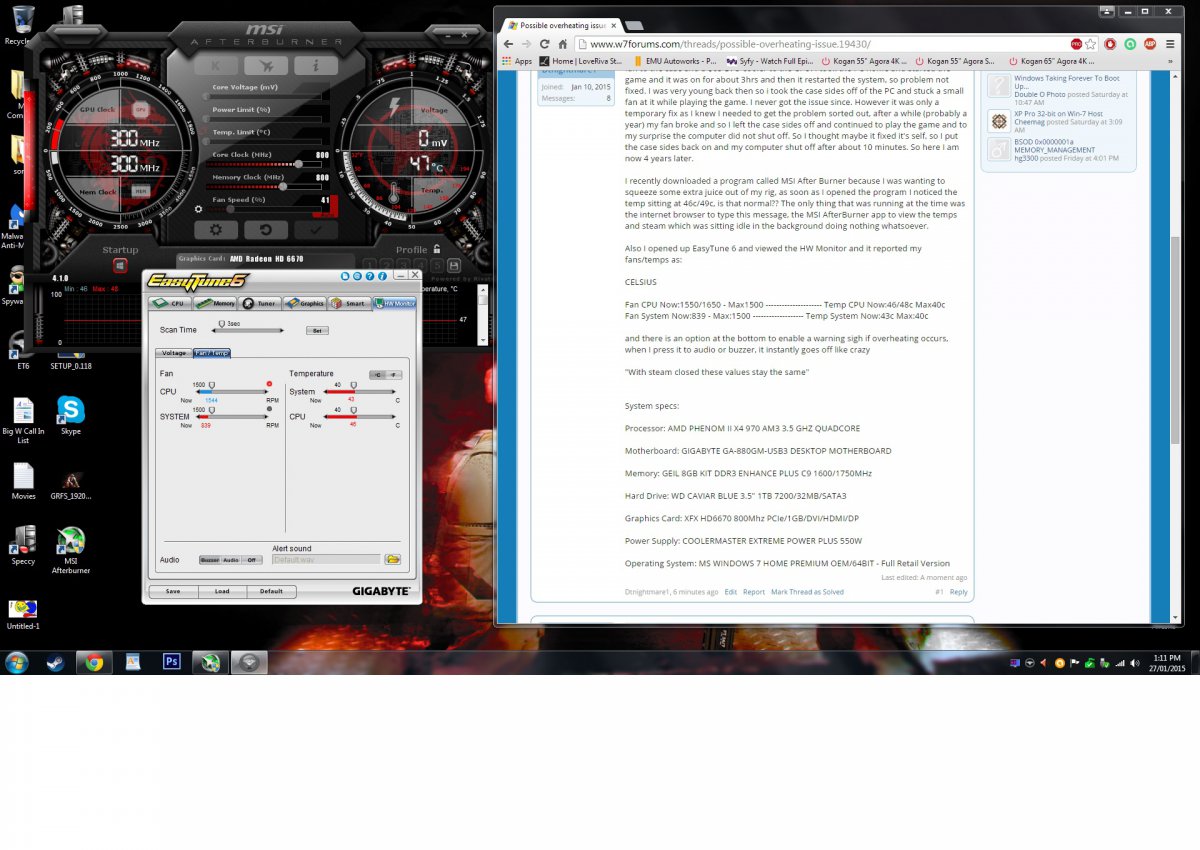 I think that I am possibly having an overheating issue, I've had this issue since the first day I bought the PC, I took it back and explained that the PC was shutting down after about 30 to 1hr of playing a low graphic intensive game, the guy put it through stress tests and such and told me that there was no issue that he encountered, he told me that if I was that worried about it I could upgrade some things, so I got him to add a $20 fan to the case and a $65 EVO cooler to the CPU. I took the PC home and started the game and it was on for about 3hrs and then it restarted the system, so problem not fixed. I was very young back then so i took the case sides off of the PC and stuck a small fan at it while playing the game. I never got the issue since. However it was only a temporary fix as I knew I needed to get the problem sorted out, after a while (probably a year) my fan broke and so I left the case sides off and continued to play the game and to my surprise the computer did not shut off. So I thought maybe it fixed it's self, so I put the case sides back on and my computer shut off after about 10 minutes. So here I am now 4 years later.

I recently downloaded a program called MSI After Burner because I was wanting to squeeze some extra juice out of my rig, as soon as I opened the program I noticed the temp sitting at 46c/49c, is that normal?? The only thing that was running at the time was the internet browser to type this message, the MSI AfterBurner app to view the temps and steam which was sitting idle in the background doing nothing whatsoever. I put my Core clock to 813mhz and my memory clock to 813mhz and my pc restarted in a matter of minutes. I didn't catch what temp it was at when it restarted though.

Also I opened up EasyTune 6 and viewed the HW Monitor and it reported my fans/temps as:

and there is an option at the bottom to enable a warning sigh if overheating occurs, when I press it to audio or buzzer, it instantly goes off like crazy

"With steam closed these values stay the same"

So anyways, I'm not sure if it's an overheating issue but it seems like it is. All I know is that it crashes unless I stick a fan pointed at it or leave the side panels off. Hopefully someone can help me find out what is wrong. Thanks.

When the computer enters sleep mode the fans are still running very fast and loud, they pretty much stay the same speed/loudness as if I were using the computer to run a game or something.

Also I have noticed another issue which is concerning me, my computer would randomly make a long whistling noise when in sleep or being use. it would last for about 20 seconds and then it makes like a burst pocket of air sound and then a noise as if something had kicked in and started up, the noise sounds like it is coming from the area where my soundcard/mobo is. 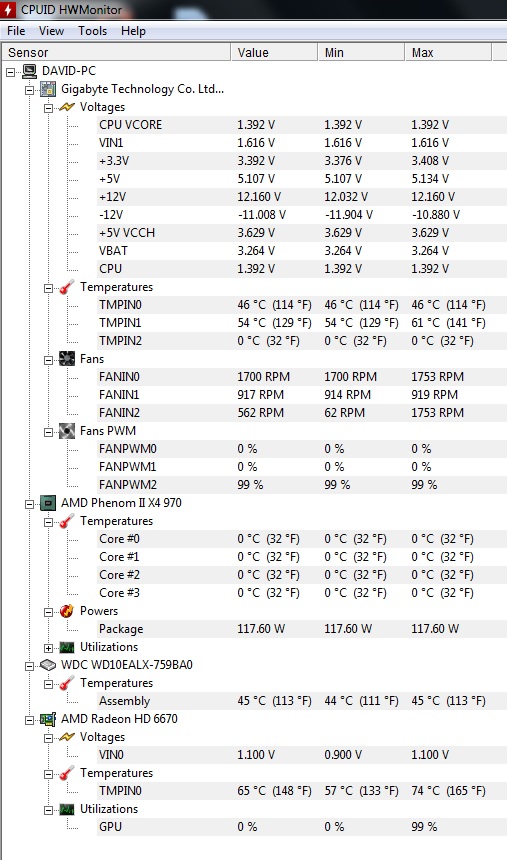 As far as temperatures, nothing looks out of the ordinary.

clifford_cooley said:
As far as temperatures, nothing looks out of the ordinary.
Click to expand...

I am so confused to why it restarts it's self when the case sides are on then :/

Unless you can show temperatures higher than 80C, I have to say it is not temperature related. CPU's don't even start throttling as a safe guard for high temperature at 80C.

When the PC shuts down next time, touch a few places and try to find the hottest locations. This may lead to the problem area.

Case sides on. IDLE and Benchmarked Load. I'm not sure how high TMPIN2 would go because I closed the program just encase it was going to overheat. When I put the case sides on FANIN2 stoped recording any RPMS. I took the case sides off and waited for the Temps to lower below 60c and then the FANIN2 RPMs kicked in. It felt like a heater when I took off the sides. Also, FANIN2 is never steady, it ranges between 189RPM and 2647RPM, it ussualy sits between 200RPM and 900RPM but as said is never steady and the fact that it's like it turns off when the case sides are put on it a bit concerning.

Also, when it would overheat a couple of years ago... It made danger like beeping noises about a minute before restarting it's self, when I took it back to the company for testing they reported no problem and when I received the PC back it made no beeping noises but still restarted. I checked the BIOS today and the Danger noises are set to Disabled. Do you think that the beeping was to do with an overheating warning thing? and does it seem like maybe the guy disabled it to mask it? seems quite dodge to me.

Dtnightmare1 said:
Do you think that the beeping was to do with an overheating warning thing? and does it seem like maybe the guy disabled it to mask it? seems quite dodge to me.
Click to expand...

It would seem so on all accounts.

You mentioned something about a fan RPM stopping when you put the side cover on. Is there a cable in the way of the fan spinning? A cable that the cover touches when in place? I can't imagine why a fan would stop working by mounting the side panel, unless it obstructs the fan movement somehow.

clifford_cooley said:
It would seem so on all accounts.

You mentioned something about a fan RPM stopping when you put the side cover on. Is there a cable in the way of the fan spinning? A cable that the cover touches when in place? I can't imagine why a fan would stop working by mounting the side panel, unless it obstructs the fan movement somehow.
Click to expand...

Yes, you see in the first HWMonitor screenshot I posted above the last post with the two thumbnails.. It reports movement for FANIN2 at like 500RMP or something? That was a report with the side panel off.

There are no cords touching the side panel. The only possible objects it could come in contact with is the black square thing that the cords connect to with P7 written on it, the back fan side panel and the EVO cooler for the CPU.. here's a pic of the inside.. yes I know it's grubby looking. :/

ALSO, don't think that the PC is overheating because of the dust issue, the overheating issue has been happening since day 1 of purchase. I do clean the case out I just haven't gotten around to it lately

ALSO, someone I have mention this problem to suspects the PSU is to blame because it's of low quality. Is that possible? 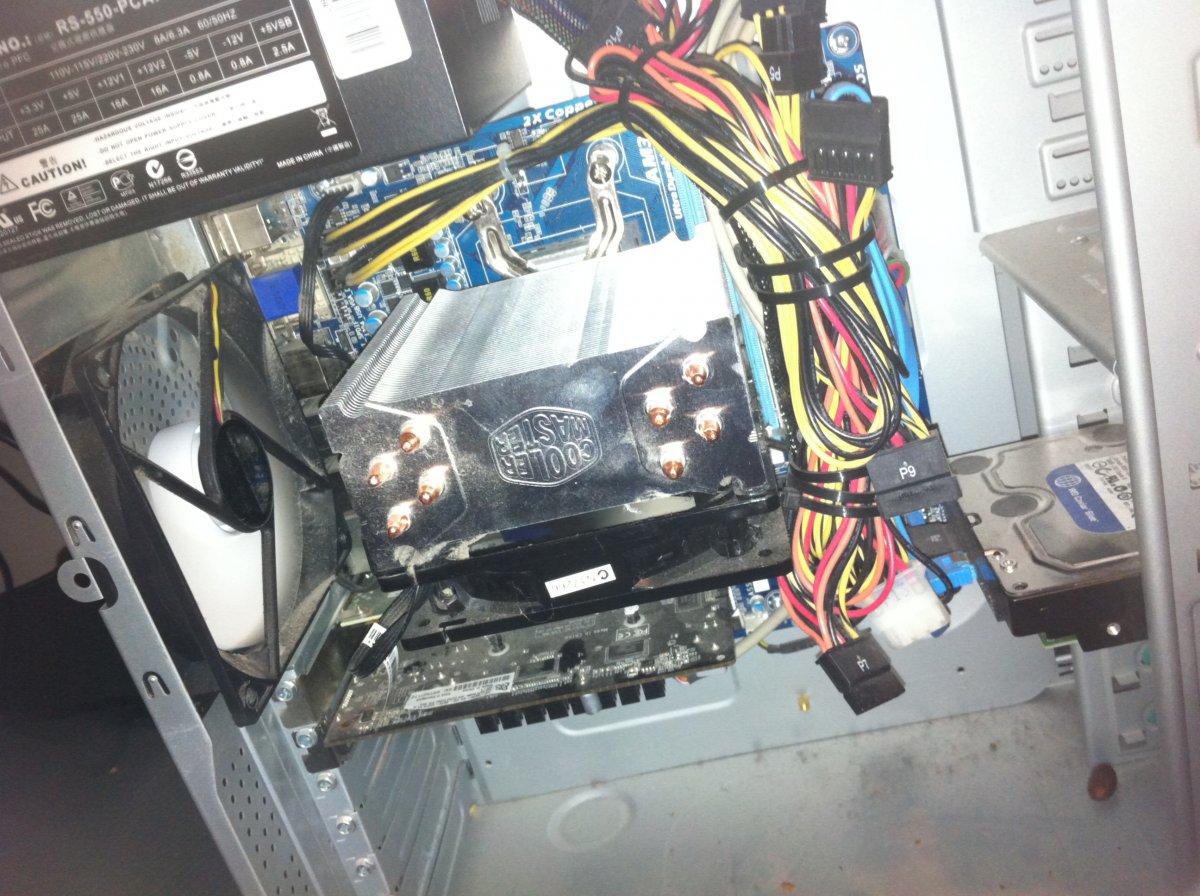 A couple of thoughts:
The paste between the CPU and the heat sink might be missing / dry / have air gaps.
If the fans go off when you put the sides on, sounds like a switch is the wrong way around.
Also the case fans need to move the air in a direction, one fan will pull air in and the others will pull air out of the case. Please check.
You must log in or register to reply here.