I have just aquired a Packard Bell Windows 7 Pro tower, and it seems all ok, but a few things are causing me some worry, I will explain..firstly I noticed that there were two seperate entries of windows in the msconfig boot menu, so I followed some advice via google, and deleted the one that was obviously not being used from the msconfig entry.

I have visited my local friend who also has windows 7 and none of those appear on his setup.

After questioning the seller, it seems he had a bad crash which required a clean restore using Acronis from a backup made a couple of months ago, and I wonder if somehow he mistakenly made the restore to drive D instead of the normal drive C.

When carrying out an Avast full antivirus scan recently I was confused to find lots of references the drive D which of course contained files which would not normally appear in that location.

Have any of our members been in this situation and have any ideas what is the best course of action.

Can you post a screenshot of what you see while viewing Disk Management?

Type "Create and format hard disk partitions" in Start Menu search to find the Disk Management.
Or find it in "Control Panel\System and Security" under Administrative Tools.

It does look as if you are correct. A screenshot will help clarify what could help you proceed.
M 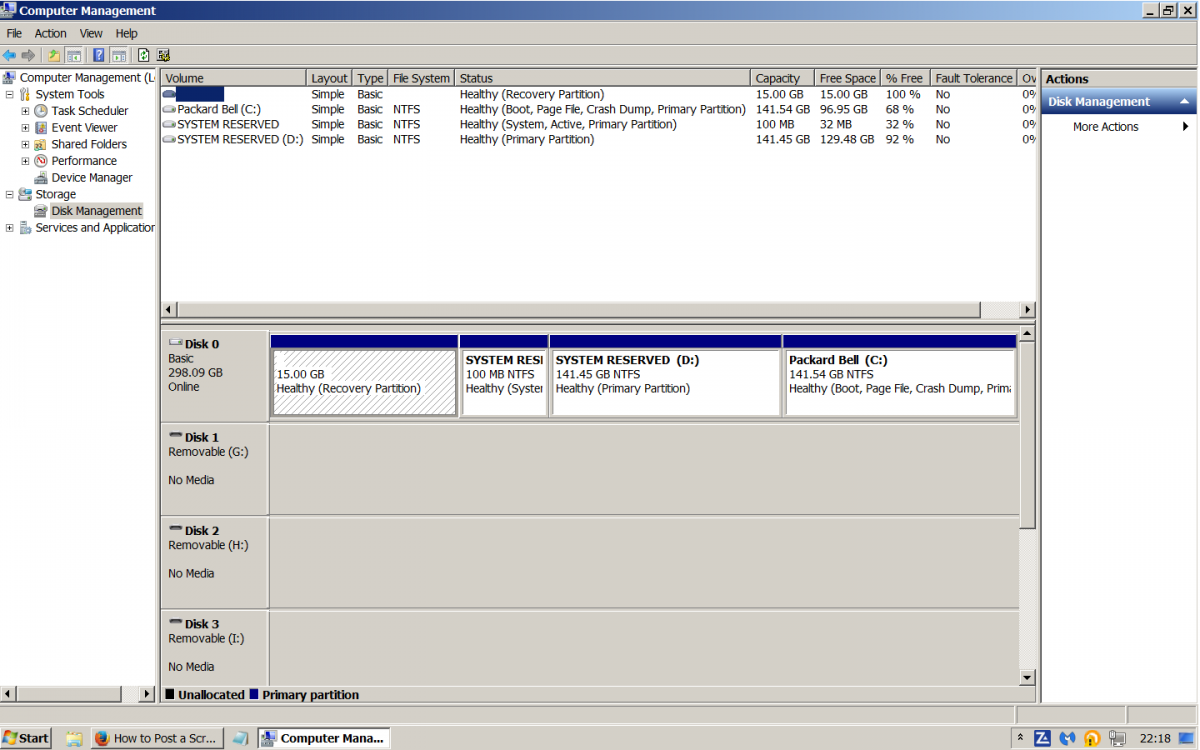 Hello again Clifford jus a bit more info for you, I found two large files, hiberfil.sys and pagefile.sys appear on both C drive and also on D drive these are sized at 2.81 gigs, and 3.74 gigs respectively meaning the machine has 6.56 gigs of duplicate data.

Does this tower have a windows pro COA sticker on it? If so, use the key to download the win 7 pro iso from microsoft recovery website (If you don't have the disk) Then burn it to a disk. Back up anything you need, (Graphics drivers should be available online to download again) I would then format the hdd and re-install win 7 pro. That way it will be a fresh install anda faster running pc, without old clutter and broken registry entrys etc that can cause problems.
That's just my personal preference.
M

Hello genesis thank you for your good suggestion which I have taken note of, and may later take the action, but as Clifford aked me to provide some info I will out of respect wait until he gives me his impression after viewing the Disc management details.

Your welcome and yes thats a good idea. Thought I would just offer another option for you to consider. Good luck with a resolution.
M

It does look as if Windows was installed on the second partition as well as the first. It's strange seeing two partitions labeled System Reserve. Who ever installed Windows last, must have don't as you suspect. I am confused though as to how the install would label D: (the old C: partition) as if it was the 100MB System Reserved partition.

Drive D: is not the active partition, nor is it the system partition. D: is simply labeled as a primary partition and can be safely removed. I would use Partition Wizard Home partitioning software to remove D and stretch C, if it were my machine.

As Genesis suggested you can always perform a clean install with the COA sticker. In fact I also recommend you download the install media before you start resizing C drive. If you run into a boot error because of the partition adjustment, the install media can repair boot files.

And just to make sure, please backup any data you may have on the drive. I don't think you will have issues, but you never can tell when they will spring up.
M

Many thanks Clifford for your wise words, and tomorrow I will carefully implement them, by firstly using Partition Wizard Home to remove D as suggested.

When using this machine it is not at all obvious that all is not completely normal and being a 64 bit processor, and 4 gig of Ram, it to me after my XP days seems quite fast,but the thought of having all that wasted disc space certainly drives me on.

I will keep you informed

Hello Clifford, before I started carrying out your instructions I did a little more investigating,and the first thing was when in Disc Manager if I right click on the bottom entry called System Reserved(D) it will let me use explore in the context menu, and it reveals that it has two very important files "BOOT" and "Bootmgr" but the second from bottom entry is just called System Reserved and will not let me explore.

Because I will be removing System Reserved "D" with it's essential files how can I can I be sure they also appear in the second one, and I will be able to continue booting up my computer properly.

Btw I have got some more details from the unit seller, and when he was using Acronis True Image to recover he found the disc letters were different in that program, and could have easily done it wrong.

Hello Clifford, I happy to say that my problem is now thanks to you completely sorted, I downloaded a program called Open Hidden System Drive 64 which allowed me to see and confirm that the required essential files were present, and then at your suggestion I used Mini Tool Partition Wizard to remove the unwanted partition.

Many thanks to your good self, and of course this great forum

Best regards mahler.
Last edited: Mar 21, 2015
You must log in or register to reply here.