Hi everyone. I am trying to digitise my old VHS videos by playing them in the old camera, hooked up via composite leads to a USB gadget ( Tevion high speed DVD maker ). I have done this in the past with no prob's, but now I can't get audio. I have two software programs; ArcSoft Showbiz DVD maker2, which came with the gadget, and Golden Videos, a free program off the net. Both tell me I have no audio recorder, and when I check I find this: 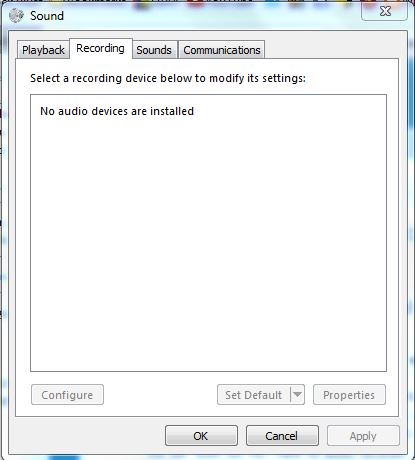 and when I check the Playback tab I find this: 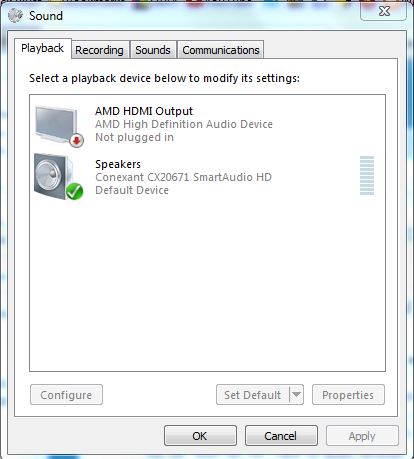 In Device Manager I update the AMD driver; Windows tells me it has the latest driver. I have been to the AMD website with no real success. Can anyone help please?
Also, I notice I can only digitise to a quite small output size; 720 x 480. Is this a limitation of analog input, or perhaps the type of connection?
Last edited: Oct 25, 2013
Ad

Re: resolution, it's basically both. Your encoding software is 8 years old. The capturing device is about equally old. I suspect neither support capturing in HD, just DVD resolution (720x480). So there's problem #1. The second issue is that VHS resolution is even lower than DVD resolution. If you bought newer equipment and software and managed to capture it at 1920x1080 it would look horrible. You can't make more from less. You can still use BluRay discs if you want, since BD supports SD video, but the best you can do is about 720x480/576 with a really high bitrate. Aside from the supposed longer lifespan and of course higher capacity of BluRay discs, quality-wise there's no benefit.

OK, thanks. The resolution issue I just have to accept; I'm digitising the videos mainly to have easier access to them, which I will get. I have switched to my PC, and I don't have any audio problems there, so I guess that solves my VHS digitising issue, but I still have no audio from the AMP Device. I have speakers sound via the Conexant Device, but no sound through the inbuilt webcam feature, which obviously uses the AMD. I have been to the Asus site via your link and installed both audio driver updates, but they are Conexant drivers, not AMD. What do you say about the ATI drivers listed under VGA? I believe ATI and AMD are the same company, and I wondered whether the audio and graphics utilities could be on the one "chip" or whatever?
Last edited: Oct 26, 2013

When you install the AMD ATI Catalyst drivers, an audio driver is installed. It handles the audio playback through your HDMI port, so that when you connect to a monitor or television with an HDMI cable the audio is carried through it along with the video and you won't need a separate cable. Webcam audio is usually captured through an on-board microphone which is built into your notebook, typically above the keyboard or next to the webcam, managed by the audio chip, in your case Conexant.

Aha, I see now why the AMD device is labelled HDMI output. Should have been obvious, but I didn't see it. The fact that the microphone doesn't work then, is related to the Conexant device, not the AMD. Having updated the Conexant drivers, any idea where I go from here?

In the Sound/Recording window, which has no devices listed, if you right-click in it and select "show disabled devices", do any appear then?
Ad

Since "showing disabled devices", a Conexant microphone now shows. I went through the microphone setup in "configure speech recognition", and it appears to work, ie the dB bar indicates in the green. However, when I try voice recording via my Asus webcam utility, the microphone has a red cross, and under the "listen" tab in Sound/Recording settings, I select to listen to it through the speakers, but get no audio there.

I wonder if going through Control Panel / Troubleshooting and the Recording Audio Troubleshooter would be helpful?

I followed your suggestion with not much success. The troubleshooters declare "unable to solve the problem". However, since revealing the microphone as a disabled device, some time later I found that it was muted in Volume Mixer. After unmuting I now see volume levels in my video digitising program but hear nothing in a recording, and using Audacity which I downloaded to test with, at max.volume levels I can barely hear my voice in a test recording. I'm wondering whether it's a hardware failure of some kind.

To be honest, I think it's very likely a hardware failure. The only other reason would be driver corruption, and you've already re-installed drivers.

There is another thing you could try, if you're feeling adventurous. You could download, burn, and boot from a Linux Mint Live CD/DVD and try and record something using its audio applications. The odds are very good that Linux would recognize the hardware. This would not be a solution to your issue as such but if you can use the microphone normally in Linux then it's for sure an issue with Windows (either the system itself or drivers). If Linux recognizes it but you can't use it, then it's definitely a hardware problem. Is this something you would consider trying?

It is something I'd like to try, if you could tell me a little more about it. I'm guessing that it is an alternative operating system which I would install to run alongside Windows, and could choose which system at start up? The CD/DVD bit confuses me though.
Ad

Sorry, I answered without thinking. I've downloaded the Linux Mint user guide pdf (Mate Version) and I'm reading that. Mate version is suggested if I don't know any better, which I don't, but if you have any other suggestions I'd be happy to hear. Unless you suggest different I'll download this version tomorrow, burn it to CD or DVD and boot from that. (you did say that, it just took a while to sink in)

The MATE version is fine. Don't install it, just boot from the CD into a live session and use it. You're not going to install it next to Windows or over it or anything. It's just running it from memory and from the disc during the live CD session.

OK, thanks, yes I see that; I've read a little further since my last posting. I'll need to consider now how to get the download, since I see it's 1gB. I have only 4gB/month here (mobile broadband), so I'll weigh up whether to order the disc and wait, or pay the download penalty.

I've spent some time now, between Windows and Mint, and while I'm unable to get Mint to recognise the vhs camera, voice recording and music playback in each OS is similar. This laptop uses an audio program called Smart Audio, and I found after maxing every setting in that, I can get voice recording, at only a moderate level and music playback is very poor quality. Do you think this sounds like maybe a sound card failure?
Last edited: Nov 3, 2013

Yeah, it does sound like a hardware issue with the audio chipset..
Ad

OK, well thanks for your help, I do appreciate it. I guess I'll look into that hardware side now.
You must log in or register to reply here.