This is all "tongue in cheek".

PROVINCETOWN, Mass. (CAP) - McDonald's executives were left with egg (McMuffin) on their face this week, when over 5,000 Happy Meals were distributed with colored condoms instead of a plastic toy from the movie The Last Airbender.

The condoms were intended for the Provincetown, Mass. school system, which recently established a policy making them available for students of all ages; they were delivered to McDonald's distribution center in Barnstable, Mass. in error.

"They were so bright and colorful, they were mistaken for Happy Meal toys," explained McDonald's vice president of public relations Robin Anderson. "Unfortunately most of the workers there don't read English, and they thought 'Ribbed Latex' was a character from The Last Airbender."

"Who ever heard of The Last Airbender anyway?" added Jose Estevez, president of McDonald's Distribution Union 8801, in defense of his fellow workers.

The mistake led to an incident in a Brewster, Mass., McDonald's, where more than a dozen 8-year-olds attending a birthday party all opened their condoms at once, and immediately blew them into balloons and started batting them around the restaurant. Shrieks of horror ensued from several other patrons, and one elderly woman fainted when a condom balloon landed in her Filet O' Fish. 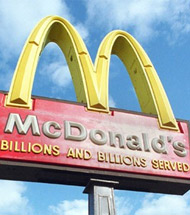 "She'd apparently never seen one that size before," explained Brewster Police Chief Bradley Heffernan, who noted that there were some similar concerns when Congress instituted its "Cash For Condoms" program.

The McDonald's incident also caused problems in Provincetown, where the schools accidentally received the restaurant's shipments of Last Airbender toys, and several were released to students who went into their school's nurse's office seeking condoms.

"This was actually very successful among the younger grades, where students would much rather get a stuffed 'Momo' doll than a condom," admitted School Superintendent Beth Singer, who in recent weeks has had to defend the school district's policy of distributing condoms to any student who asks, and not notifying parents.

"But unfortunately there was an issue with Last Airbender Aang Water Cannons being distributed to high school students, resulting in several unwanted pregnancies," said Singer.

"Dude, I followed the directions and everything," said Provincetown High School sophomore 'Josh,' who convinced his girlfriend 'Jennifer' that everything would be okay if they assembled the Water Cannon correctly and used it according to the specifications on the accompanying instruction sheet. "It was fun, but no way did it keep her from getting knocked up."

Parents in Provincetown have been understandably upset at the mix-up, particularly coming off the controversy about the condom distribution.

"It was bad enough to hear my first grader could get a condom in school, but to hear they could be given that plastic McDonald's crap and the school wouldn't have to let me know, well, that's just unacceptable," said parent Sally Cooper. "At least a condom has some practical use to it."

Meanwhile, the producers of The Last Airbender have issued a formal thank you to the Post Office, McDonald's and the Provincetown School System for "doing something that might actually get somebody to notice our lame movie."
Last edited: Jul 7, 2010
Ad

Sounds like another lawsuit coming McDonald's way. It's their job to check what goes into those "happy meals".

Reminds me of another real incident that happened at Burger King. A birthday party was given for a lady's 90th birthday. The cake was brought out, without anyone even checking it out. Someone had took a squirt bottle of ketchup and wrote "F**k you, Granny on the cake, and she was the first to see it. All hell broke loose, and the cake ended shoved in the manager's face, along with a solid punch behind it. After all, he was responsible for the action of his employees.

Strange, how things always happens at fast food joints. That's one reason I don't go to them at all, is the workers just don't care anymore, too sorry to check out meals to kids and what a way to wish a 90 year old a happy birthday.

I cry BULLSH*$ ! Sounds like an urban myth or April fools joke.

You guys apparently didn't read the second line: "This is all 'tongue in cheek'"! LOL!

You know satire is good when everyone believes it as gospel.

I would much prefer to eat a condom than to infect my body with anything from McDonalds or Burger King.
Ad

andsome said:
I would much prefer to eat a condom than to infect my body with anything from McDonalds or Burger King.
Click to expand...

:lol: How true
You must log in or register to reply here.